Where did Moses write about Jesus? (Part 2)

This post is a part of a series. It continues where Part 1 left off. If you’d like a video version of this post, you can watch/listen to the video recording of the lesson I learned all this from.

In the previous post, we raised a question that stems from John 1:4 and Luke 24:44. Where did Moses write about Jesus? Peter gives us the beginnings of an answer in Acts 3:

Now, fellow Israelites, I know that you acted in ignorance, as did your leaders. But this is how God fulfilled what he had foretold through all the prophets, saying that his Messiah would suffer. Repent, then, and turn to God, so that your sins may be wiped out, that times of refreshing may come from the Lord, and that he may send the Messiah, who has been appointed for you—even Jesus. Heaven must receive him until the time comes for God to restore everything, as he promised long ago through his holy prophets. For Moses said, ‘The Lord your God will raise up for you a prophet like me from among your own people; you must listen to everything he tells you. Anyone who does not listen to him will be completely cut off from their people. Acts 3:17-23

Peter is quoting a passage in Deuteronomy 18:17-20. The wording is slightly different from what you’d most likely see in your Bible since Peter was quoting from the Septuagint, a Greek translation of the Hebrew scriptures. But the message is the same:

The Lord said to me: “What they say is good. I will raise up for them a prophet like you from among their fellow Israelites [“brothers” or “brethren”], and I will put my words in his mouth. He will tell them everything I command him. I myself will call to account anyone who does not listen to my words that the prophet speaks in my name. But a prophet who presumes to speak in my name anything I have not commanded, or a prophet who speaks in the name of other gods, is to be put to death.” Deuteronomy 18:17-20, NIV

Through Moses, God says that he will raise up a prophet that the people must listen to. What are the characteristics of this prophet?

First, he will come “from among their brethren/brothers.” The NIV has “their fellow Israelites”, but this is an interpretation. How might we confirm that this interpretation is warranted? In the preceding chapter of Deuteronomy, God gives the people instructions on how to choose a king. He uses the same word. Let’s see how he uses it:

So when God uses this word for brethren, he means that the person can’t be a foreigner, i.e. not a member of the tribe of Israel.

Excellent question. Peter seems to think Jesus was, based on the passage in Acts 3 that we quoted previously. He’s not the only one, though. Some of the other Jews thought so too after Jesus fed the 5000.

After the people saw the sign Jesus performed, they began to say, “Surely this is the Prophet who is to come into the world.” John 6:14

And again, when Jesus is speaking during the Festival of Tabernacles:

On hearing his words, some of the people said, “Surely this man is the Prophet.” John 7:40

Incidentally, there are approximately 1.8 billion people in the world who do not think that Jesus was the prophet that Moses was talking about. These people are Muslims, and the reason they don’t think so is that they believe that Muhammad was the prophet like Moses. Typical points made in favor of the similarities between Muhammad and Moses are:

With that in mind, let’s see what similarities exist between Moses and Jesus.

Similarities between Jesus and Moses

I’m not providing scripture references for each point, but all of the details of Moses’ life described here are found in Exodus 1-20 and Deuteronomy 30-34.

“So Joshua fought the Amalekites as Moses had ordered, and Moses, Aaron and Hur went to the top of the hill. As long as Moses held up his hands, the Israelites were winning, but whenever he lowered his hands, the Amalekites were winning. When Moses’ hands grew tired, they took a stone and put it under him and he sat on it. Aaron and Hur held his hands up—one on one side, one on the other—so that his hands remained steady till sunset. So Joshua overcame the Amalekite army with the sword. Exodus 17:10”

Think about it. 2 men on either side of him. On a hill, Moses is holding his wooden staff. He has to hold it up in order for Joshua (the Hebrew form of the Greek name “Jesus!”) to win the battle against their enemies. This picture might help: 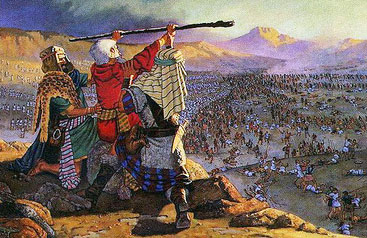 I think these similarities are striking. Details about the biographies of their lives, about the miracles and acts they performed, and their role between God and men… When I look at these similarities, I see a definitive portrait of the lives of these two men.

When the apostles saw Jesus, they recognized him as the Prophet promised hundreds of years beforehand by God to Moses. Because of that, they internalized what God had said: “you must listen to everything he tells you.”

What about you? I’d invite you to consider if these similarities are meaningful. If so, then this is a powerful proclamation of who Jesus is: the promised Prophet!